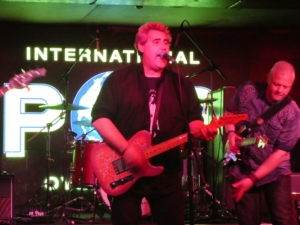 International Pop Overthrow (or IPO, as it has affectionately become known) is a pop music festival that has been held for the past twenty-two years in Los Angeles. They have also held IPO for various years in Chicago, New York, Boston, San Francisco, Phoenix, Detroit, Atlanta, Portland, Nashville, Austin; Vancouver and Toronto, Canada; Stockholm, Sweden

The purpose of International Pop Overthrow is two-fold: one aim is to give every worthy band who’d like to play their music in a festival atmosphere the chance to do so, and the other is to bring pop music the attention it so richly deserves. They made great strides to that end, garnering press in several noteworthy papers and blogs in each city in which we hold the festival, and creating a very positive buzz about pop music within the independent music community. In addition, every artist who plays the festival feels as if they’re part of something fulfilling, being on bills with like-minded artists with whom they can bond, and playing in front of an audience who will “get” their music

It was a brilliant exposure for his songs working with local musicians he soon built up a 30-minute set on the small stage in 2014. David Bash Describes the band on the IPO website at the time

“Historically a recording project (they’ve got three EPs and sixfull-lengthh albums already to their credit!), but more recently converted to a live band, these gents from Derbyshire have developed their own fresh new sub-genre of pop and prog that they like to call “Sofa Rock.” Influences include Pink Floyd, Love, The Doors, Caravan, Gong, Kula Shaker, The Beatles, & music from the late ‘60s early ‘70s prog/rockpsych. Their latest, Coloured Dream, “… is full of deceptively lightweight songs that impinge on your consciousness like hazy whispers.” (Geoff Barton, Classic Rock Magazine) A seventhfull-lengthh album, Thornby Park, is in the works, and you can stay tuned to watch it all develop by following them on Twitter! Cool!”

and he also says;

“with a rather lengthy and impressive back catalog of EPs and albums), but more recently converted to a live band, these gents from Derbyshire have developed their own fresh new sub-genre of pop and prog that they like to call “Sofa Rock.” Influences include: Pink Floyd, Love, The Doors, Caravan, Gong, Kula Shaker, The Beatles, & music from the late ‘60s early ‘70s prog/rock/pysch. Their latest EP, Threadbare, provides an hypnotic slice of 21st Century Life with tinges of late ‘60s psych!”

Lewis also features on two IPO compilations “International Pop Overthrow, Volume 17” Pop Geek Heaven (PGH-36) with the track ‘10,000 light-years from the sun taken off The 2015 release ‘Thornby Park’ which was reviewed by Ted Frank who commented’

John M. Borack who reviewed ‘Days So Long Ago’ for the “International Pop Overthrow, Volume 17” was impressed to say;

“Split Sofa’s wonderfully hypnotic, stylized nugget “Days So Long Ago” are two of the other high watermarks on disc one”

The Cavern and The IPO continue to survive and produce great music from great unsigned artists who put everything into something hoping for a glimmer of acceptance in some small way. There will always be people that want to turn that screen off and create music or art and it’s nice to know there are people like David Bash who are willing to give an artist a chance to play original music at such an amazing Venue. The spirit of the music lives all around Liverpool and even though the cavern is not on its original site it really does feel that you do have a sprinkle of Cavern dust when you leave

” I am really proud that I achieved a goal by playing the famous cavern, it was a dream for so long.

To say I have played the cavern 5 times is very gratifying. The cavern is very special and always will be” – Lewi